The article and the video on Men’s Up.

The article is in French, but here is the text of what is presented :

Francois Audouze has an eye that sparkles, assuredly this man is happy. We are in one of those beautiful Parisian houses he likes, the Taillevent. He is a little home here, as he is with many other great chefs with whom he has worked for years to develop his outstanding Wine dinners.

The principle ? Ten guests, a sumptuous dinner and ten old wines – even very old ones – coming from his cellar. He is expecting his guests this evening for the 205th edition of his « Wine Dinners », opening the bottles to be tasted this evening: Château Haut-Brion 1979, Corton Blanc Jacqueminot 1919, Vosne-Romanée Antonin Rodet 1947, Gevrey Chambertin Maison PhilippeJarrot 1947, Clos Gamot Cahors 1893, Châteauneuf-du-Pape Chartron 1928, Chateau Gilette 1945, Chateau Filhot 1928 … Evidently we do not talk about the champagnes that will be opened as an aperitif. All these bottles come straight out of François Audouze’s cellar. A cellar as there are few, a cellar that defies superlatives. « It is an old wine cellar, » explains François Audouze, « it is essentially French and has of nearly evry vintage. There are between 35,000 and 40,000 bottles, and for those over 50 years of age, there must be about 10,000 « . Almost 8,000 lines of cellar, François Audouze does not take the exact account. « I have no ambition to have the largest cellar but I probably have the most diverse. »

François Audouze is an autodidact of wine, a collector by chance. If the cellar of this old industrialist has nowadays bottles as old as rare, it is by grace of an encounter with a wine. « I started entering wines in my cellar in 1970. At first I knew absolutely nothing about it, it was by fumbling and asking the advice of my wine merchant that I started. One day a friend talked about a grocer who was opening some crazy bottles on the Friday night after the office, and I said, « Well, we’re going! « It was with the blind tasting of a Climens of 1923 that everything began: » I almost fell backwards, « says Audouze, » it was so much more complex than anything I had tasted. It was then that I knew that my way was the old wines. «

For François Audouze, the doors of a world are opening up. The impetuous youth loses its attraction in the face of the subtlety of a wine polished by time, which reveals itself with delicacy. Contrary to popular belief, a wine does not die. Finally not always. « Everyone is convinced that a wine dies, and Robert Parker has reinforced this idea with his concept of a maturity plateau when it is completely false, the proof is that my greatest white wine is a Montrachet from 1865. So where is the maturity of this wine? Death comes mainly from the cork, and as soon as the cork no longer plays its role, there is evaporation and denaturation of the contents. François Audouze, if he is now known as a collector, does not quite recognize the logic that traditionally prevails in the elaboration of a collection: he follows his intuition more than his reason. « These are just buying led by my heart. Everything I buy is made to be drunk, not to be stored. »

Few people can boast of having tasted wines as old and as many vintages: 174 to be precise. François Audouze’s record includes more than 14,000 wines, discovered on the occasion of meals, which he records every detail on a blog with lyrical and loving accents. No one, it is said, writes as well on wine. The man is above all an Epicurean. It is only to see with what delight – even jubilation – he observes, hume, savors and speaks of what he eats or drinks to understand that for him, the good bottles are made to be opened and especially shared. The circle of friends no longer enough, he created the « Wine Dinners ». « Having a lot of wines, I created a structure that sells dinners. It’s not for profit, but for people to have access to my wines, » explains François Audouze. « It is not a tasting, it is a meal, the recipes are made to go with my wines, there is a quest for perfect food and wine, my role is to tell people to forget everything of what they have been drinking before. « It is a new experience, instead of judging, they will try to understand. »

For this 205th dinner, François Audouze teamed up with chef Alain Solivérès. Both men are used to working together. Dinner will start with two champagnes, a Lanson of 1971 and a Salon of 1988 on a Gillardeau oyster in sea water jelly. Dinner will then be placed under the sign of the hunt: bar of line, pheasant, roasted pigeon And hare with a spoon. « The chief must have the humility to put himself at the service of the wine. To go with the old wines, it is necessary to simplify the recipes. » Whether it is the choice of wines or recipes, everything comes from a game of subtle correspondence. « When I create a dinner, I am like the painter who creates a painting, every dinner is a creation of the moment. And there is always a coherence: two champagnes, two dry white wines, two Bordeaux, two burgundies and ends up with two sweets.  » Famous labels and more modest wines come together without complex. The dean, a Cahors Clos de Gamot dates from 1893. A canonical age that would have earned him a probable death if François Audouze had not opened it according to a method perfected by his care. « If I did not invent it, I have largely contributed to make known the method of slow oxygenation.If one oxygenates extremely quickly a wine, as when one carafe it, one will kill it. Wine is opened and is left alone for four to five hours, there will be a slow oxygenation work that will eliminate the small olfactory impurities, evaporate the bad molecules, and all of a sudden you will have an opulent wine ready to drink. Beyond 25 years, I recommend that you open a wine for four to five hours before and do not touch anything. «

A little intimidated at their arrival, the guests quickly take the game. Whether you are a connoisseur or a simple curious epicurean, François Audouze makes no distinction. He takes his guests by the hand following a true ritual, to the discovery of this world that he made his own. He gives them before the beginning of the meal some precious advice to make the most of the dinner « We drink slowly, we eat slowly. » If you swallow your glass or your dish all at once, you will have little opportunity to see the relevance of the combinations that we wanted to offer you. François Audouze: « We do not judge a wine, we try to understand it, we are humble in relation to wine. » And he concluded with a broad smile raising his glass: « The last rule: we are here to have fun! » 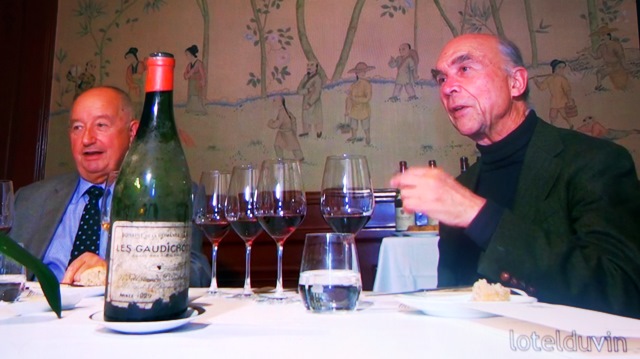 I took the occasion of the 200th dinner to make small films about some subjects like the method of opening old wines, the philosophy of my dinners and so on.

The film 1 shows the « Audouze method » which is crucial to have the old wines showing their best.