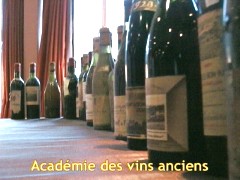 If you want to see how to open a bottle of an old wine, please click above on the word "vidéo" or on the image to the right

And as it is a real subject of excitement for me to imagine the future of vintages, in the book that I have made, I have made a ranking of the millesimes on 130 years, considering what they were producing as a taste for the year 2003, but I have made a ranking of the same millesimes, for what they will show in 2018. It is not difficult for me as I have followed every millesime in its evolutions. I do not pretend that it is true, but I pretend that it is highly probable. And remember that I hate to say “I know”, when I prefer to gently present every of my experiences one after the other, without taking conclusions.

The problem with a human brain is that he likes to rationalise everything. When the water moves on sand, the sand does not remain flat. It creates waves. When the wind moves on the sea, it does not creates a flow, it creates waves. The water which flows from mountains does not take a direct line. So, many people who have drunk wines of the 70ies showing signs of weakness would like to conclude : they go, with a direct line, to their death. It would be so easy. But it is not like that.

Richard Geoffroy, the man who makes and blends Dom Pérignon told me one day : Dom has peaks of perfection when it is 7 years old, 14 years old and 30 years old. I was so happy that we talked about that as it is what I think : the life of a wine is not linear. And, second point, the sinusoid has not a constant period but a varying period.

There are two ways to consider a wine. In its verticality, it is a photography of what the wine is in every millesime at a precise date. Due to Bipin Desai I made a vertical tasting of Montrose which shows obviously that the optimal period for Montrose is the marvellous period of the 20ies. And last week I explored Jura wines, and for red wines of Jura, it is obvious that the glory of the reds is obtained with the wines of the 40ies.

But there is another approach which is to consider how the evolution of every millesime is. And there, I have the chance to witness that. I will give you my opinion on certain years, which is of course a mix of the observation of various wines, and is influenced by my taste. I am a human being, so my taste belongs to me. But as I have checked the reactions of people drinking the same wines with me, I feel entitled to say some opinions. Of course I know that showing me in the middle of the field, I can easily be attacked. But I prefer to talk about my experience than to stay silent. The comments are based on red wines, with a mix of Bordeaux plus Burgundy (difficult to mix).

– after 1990, I cannot give any opinion, as it is not a subject on which my opinion is useful for anyone.

– 1990 is a magnificent year, one of the best ever. I see it performing magnificently at any age. It can be drunk now, and will be appreciated at any age. A year which will last for ever (one will find that 1989 performs more for several wines, but what I want to do is to give an idea on the life of years)

– 1959 is a fantastic year, perfect now, and which will never be better, as it is perfect. It could happen that this year goes to sleep at one period as does the decade 30ies now, but this wine has to be adored now.

– 1955 is at its full optimum. To drink now, as it will never be better (except perhaps in more than 30 years)

– 1949 an unpredictable year which does not want to be classified. I am fascinated by its uncertainty and charm.

– 1945 and 1947 : I associate the two years which are very different, and which are very different for every wine. For every wine one of the two years is a full success, but rarely the two. Some people can honestly think that they are at their best. I expect they will soon become as 1928 and 1929. So, I wait a little while consuming them from time to time

– 1899, 1870, 1869 and before : have given to me some of the greatest pleasures of my life, but it is absolutely sure that no wine will improve. So these wines have to be drunk as soon as the opportunity exists. As I have many in my cellar, it is the opportunities that I want to create.

For me, the limit to the question : “can I keep them ?” is 1915. It is not the question of the cork, which is crucial for younger wines too, but for the taste, it is sure that no taste will gain to be kept for wines older than 1915.

It is clear, reading that, that I do not consider wine as having a linear life. To think that the life of a wine is linear proves only a lack of experience of some of the greatest wines that vines have given.

I will make now two comments :

– I am free, I do not work for any interest in the wine business, so if old wines were bad, I have the weakness to think that I would have noticed it. And I would have changed my subjects of pleasure. I have in my cellar a significant number of fantastic wines of 1990. It could help me if I changed my mind.

– in a discussion, I have never seen someone being able to change the political preferences of someone else. So, I consider that I will never convince an adversary towards old wines to begin to love them. It is above my ability.

But I felt that it was my duty to say what is my intimate conviction on wines that I love and which have given to me unparalleled pleasures in my life.