Loren Sonkin had informed me about a trip that he would do in France. We decided that he would come with his wife and his children to our house in the South of France. As a friend of mine, a Dutch man, Harry, had planned to visit us, we organised a meeting by our house with Loren and his family and with Harry and his son. 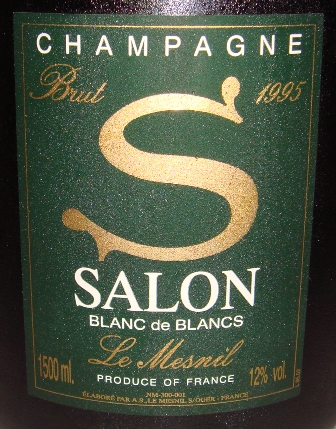 They arrived for lunch time and we had for aperitif a Champagne Salon in magnum 1995. The champagne is obviously a great champagne, but I was not so impressed, as it did not give the emotion that I like in Salon. What was missing ? I would be unable to say. Probably just only some years of cellaring, despite a convenient format of magnum.

We went to a restaurant near our house which is completely confidential. No sign, no name, no indication to find the place. The restaurant was booked for us only and as the chef is a friend, we could organise the lunch to our will, with our wines. 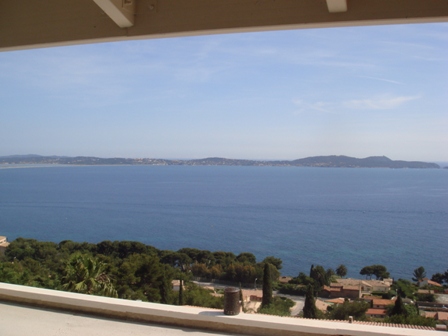 We looked at what was prepared as the kitchen opens in the dining room, and we drank with a Pata Negra two wines that I had kept after a dinner of 1.5 day before : Chateau Pibarnon Bandol 1990 which is very sweet, civilised, velvety, charming and filling gently the mouth. The other is Chateauneuf-du-Pape Domaine du Vieux Télégraphe 1990, highly expressive, talented wine matching very well the fat ham. 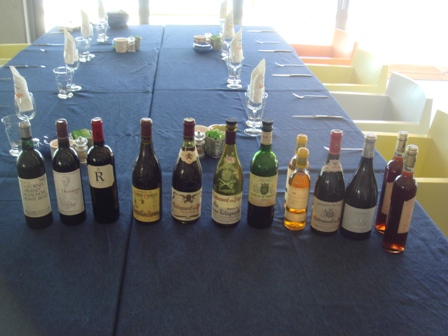 (the wines among whom we chose the wines of the lunch) 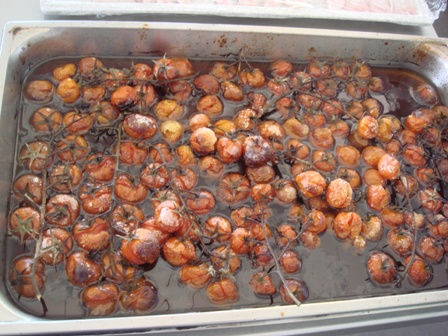 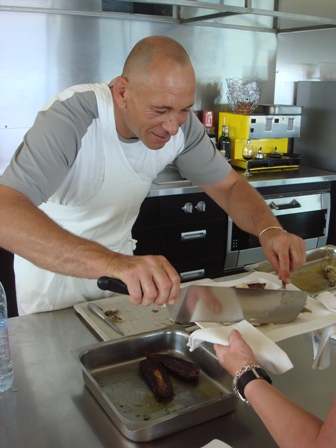 We sit at the table with a wonderful view on the sea and the islands, and we begin with Chateauneuf du Pape “Pure” domaine La Barroche 2004, on asparagus and fish. 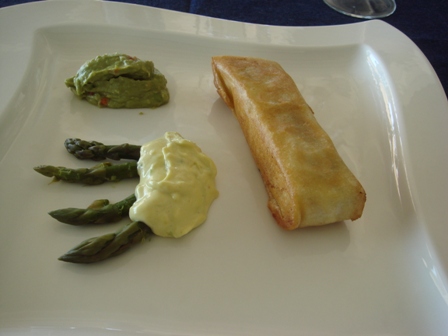 The “Pure” is a bomb. It has an extremely high level of alcohol, certainly above 15°, but it is elegant, frank, easy going, and by no mean excessive. As I knew that Harry would bring a wine of this kind, I had brought with me “R” of Rimauresq Cotes de Provence 2003. It is in the same league of very expressive wines with an enormous power. I found that the Cotes de Provence has a broader spectrum of tastes than the Chateauneuf du Pape. But the two wines were good, even if they do not belong to the usual tastes that I try to find. 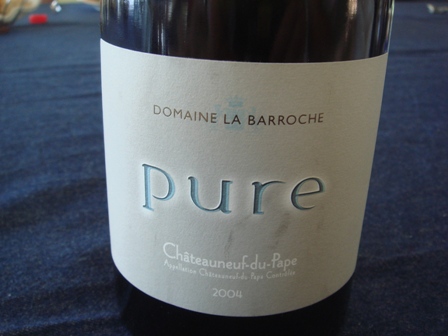 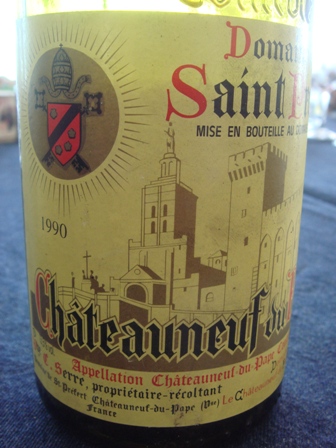 (The "Pure" and the Saint-Prefert) 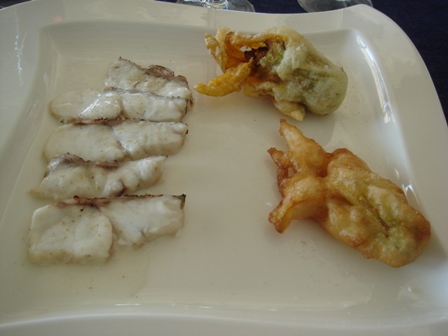 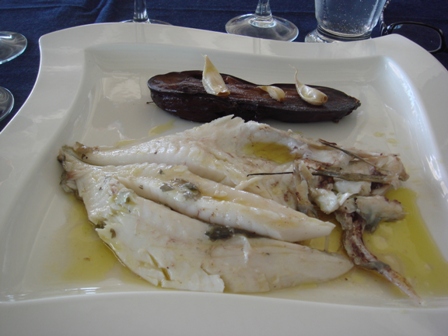 Then we had flowers of courgette with simply cooked slices of grouper. On that and on John Dory fish, we had a Ridge Monte Bello Cabernet Sauvignon 1981, a gift of Loren, and a Chateauneuf du Pape Domaine de Saint Préfert 1990 of Mr Serre that I had brought. The Chateauneuf is an excellent wine, with a very high personality, but the charm of the Ridge conquers me and makes shadow to the Saint Préfert. It is so nice ! It has sweetness, softness, and has a great personality. I loved this wine, and it made Loren happy. So he asked that we open his other gift, Dominus of Christian Moueix 1987. This wine, after the Ridge seems very strict, stiff, with no Californian reference. It is more Pomerol like. 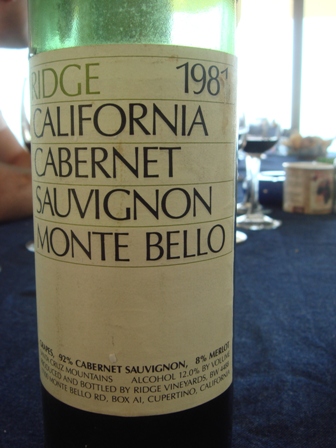 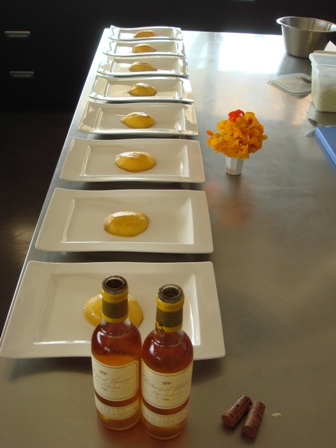 We had then slices of mango with Chateau d’Yquem 1986 (two halves). The combination is fantastic and my friends laughed when I told them so many times : “chew and sip the smallest quantity of wine” (I said that minimum ten times).

We had then a chocolate dessert, with a solid cake including a liquid chocolate. It went with a Maury La Coume du Roy 1925 which was absolutely delicious and completely adapted to the dessert. 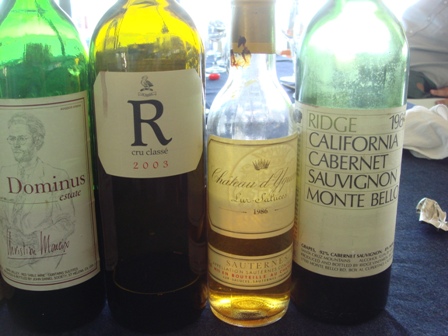 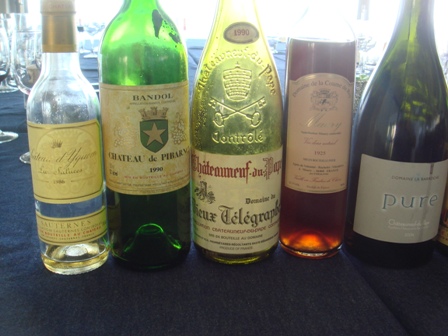 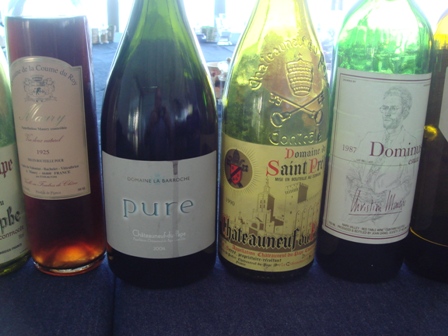 After such a long lunch, we played tennis, which finished killing me. Loren and his family drove back to Aix en Provence. Harry and his son had dinner by our home, and we finished the wines of the lunch. The Saint-Préfert was largely better now, and surpassed the Dominus which remained strict and a little too simple. The Yquem was glorious with mango as we had on the lunch.

This was a good opportunity to meet people that I knew only through their messages on the mark Squires forum, and to meet Harry with whom I had shared some dinners in New York and Paris. The wines were pleasant, and the atmosphere was peaceful and smiling. The wine which made me particularly happy is the Ridge 1981, which, in a way, evokes the Vega Sicilia Unico, as it has density, a sharp structure, and a gentleness which makes me feel well.

We have spent a very friendly day, by a wonderful weather along the sea.