This story is a side effect of writing on the forum of Robert Parker. I received an invitation for a dinner.

I leave my country where students protest in the streets against the Government to arrive in a country where the streets are clean, the mobile phones can be used when being driven in a car because the signal is good, where people tend to work, where it is possible to find a bar after a huge dinner and to be served by a handsome and competent young girl. A country which has a perfume of lower taxes, where people know what is wine. It is named Belgium.

A group of wine lovers receives Dan Kravitz, an American importer of wine. The idea came that I could join the group. As Dan wanted to taste a 1945 Essencia brought by a German member of the group, it was the occasion to create a match with one of my Cyprus 1845, a wine for which I have a special love.

We are 8 people meeting in a nice restaurant where the food is excellent. The chef has a very unusual look, very tall and imposing, small round glasses and very long blond hair, the length of the hairs being generally associated with an increasing baldness, and shows an interest about what we do. That was extremely pleasant. He smoked huge cigars with our Belgian friends after the dinner and talked with us in a pleasant way. One American, one German, one Spanish, one French and four friends of Antwerpen formed a very nice group. One of them told me : “do not underestimate Belgians and their cellars”. I had not such an intention but I know now that the Belgians that I met know what wine is, have great wines, drink great wines and have a great generosity.

We began with Bollinger RD 1990, which replaced an announced Krug 1990. The champagne is obviously a great one, but is too green, too young and should wait years before being opened.

The menu had not been prepared for the wines, so the only really passionate combination was the first one : raw langoustine with a sauce of oyster and caviar of Belgium (does this exist ?) accompanied an incredibly great wine : Chablis Grand Cru les Clos Raveneau 1972. The smell is huge, penetrating. Very mineral, very different from what a Chablis should deliver, this nose is impressive. And in mouth, it is a festival of complexity. This wine impresses me.

Then three wines of various qualities which changed a lot from the first contact to the last sip. The Puligny-Montrachet Clos de la Garenne Etienne Sauzet 1992 has a very enigmatic smell in which I found traces of makeup powder. It has a nice fruit in its taste, but finishes very quickly. Largely shorter than the Chablis. The Batard Montrachet Domaine Leflaive 1992 is a bomb. It is a mouth invader. Generous, complex, with an incredibly large set of tastes, this wine is nearly too much as it ignores the food, conquering the palate with its power.

And, with a paradox, this Batard helps the following wine to shine even more. The Puligny Montrachet Les Pucelles Domaine Leflaive 1982 appears fantastic, emotional, seductive, feminine, gracious, impressive. I have adored this wine above the others. But when the wines in the glasses expanded, the Sauzet gained some length, and was more appreciable. The Mount Eden Santa Cruz Mountain 1999 which was served just after these three was not in a position to shine. Smelling and tasting like banana, the wine had a limited interest for me.

The course a soup of beans with an eel was purely delicious.

The three first reds came blind. I was impressed immediately by the generosity of the second. When the wines were installed gently in their glass, it was obviously the first which was evidently the greatest : it was Chateau Latour 1990. This wine is a perfection. It is very drinkable, and it makes sense to drink it at this age, even if it shows a promise of being transcendental in ten or twenty years. This is the unique perfection of Bordeaux, with every aspect attaining what it should. The second is more sexy. More alcoholic, it has a the charm of a morganatic lover. It is Beauséjour Dufau 1990. Its reputation is fully accurate. The third is Montrose 1990. And this wine that I have already drunk several times did not please me so much tonight. Great, but very far from the Latour 1990 when considering what we had in our glasses.

The course of fish was absolutely not to be consumed with the wines.

A Phelps, Eisele 1977 was a little curious at that time, but the more it opened the more I loved it. I found it very Bordeaux like which is a compliment. It had finesse and charm.

But what could it do when served with Mouton-Rotschild 1982 which is an hymn to the glory of Bordeaux. We were exploring what can be considered as the best among young wines. Very balanced, velvety, filling the mouth with politeness but efficiency, the Mouton is magnificent. It is very hard to say which flight, the whites or the reds, is the best, as both are impressive. But the Latour 1990 and the Mouton 1982 represent something rare. 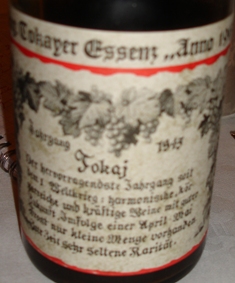 I have had what pleases me a lot : a discovery of taste. And I enjoy a lot. The cheese, époisses of Berthault, which accompanied the Yquem 1989 is demoniac. This is so great! The 1989 is magnificent in its youth. Not making too much, elegant, it represents an archetype of Yquem. The Yquem 1967 has a marvellous colour, probably a little more brown than the 1967 that I have and have drunk. Excellent as usual, it is a very gratifying Yquem, with a length that is its signature.

The Essencia Tokaji 1945 of Rainer is excellent. The sugar is heavy, but the botrytis is elegant. It tastes like over mature grapes burnt by the sun. Becoming more and more elegant, I appreciated it even if it is rather monolithic when compared with Yquem.

I am probably a bad judge for the Cyprus 1845 as I am in love with the wine. The smell is of pepper and liquorice. Deep as a perfume and invading. And in mouth, it is as if you look at the sun with your open eyes. You are hit by an unbearable flash. It is as if heavy liquid gold would be poured in my mouth. Complex, with an immense set of flavours, I adore it above everything. I can imagine that some friends, comparing it to Madeira could have been unimpressed by this Cyprus. But for me, the old muted wines are near alcohols when this Cyprus is a real wine like a Sauternes can be, and I love a length which never ends. I can imagine the pleasure my friends had with a cigar and this Cyprus.

We continued endless discussions in a bar with a juniper alcohol. We were happy.

What to say about this event? The Belgian friends and their friends are dynamic, know really the wines that they drink, share wines of a remarkable quality, and are of a great generosity.

The format of what I do is different as I open largely less wines; I care more for the food to create nice combinations. But such an event in a very friendly atmosphere and outstanding wines pleased me a lot.

I thank the Antwerpen group to have invited me to attend this very memorable event. I will remember that the country where people really drink wine is Belgium.