The French « Académie du vin de France » was founded in 1933 by Edmond Sailland called Curnonski (just a short note on this name. Edmond was in a period when it was popular to be either Russian or from Poland: Nijinski was a famous dancer. Wanting to find a pseudonym, he decided that it should finish by “ski” to be as the mode required, and found that in Latin language it would be : “why not ski?”, which is “cur non ski,” so Curnonski). The idea of the Academy was to have representatives of the best wines in France to talk to the government or to the press. This club was sort of a lobby. They have working sessions and an annual dinner, and they made me the pleasure to invite me for the last four annual dinners. Some people being not wine producers are there like Alain Senderens or Alain Dutournier, two famous chefs, and some people are considered as friends of the Academy like the journalist Bernard Pivot, a man who helped a lot the French literature and language. We are very few to have this honour.

It begins by one and a half hour of wine tasting of their latest production, so 2003 or 2004, and then, there is a great dinner by restaurant Laurent.

Aubert de Villaine, owner of Romanée Conti came very early to make a very serious analysis of every wine, wanting to be before the crowd which will not allow exploring all the wines. His wife Pamela prefers to talk with friends. Some nice wine makers comment their wines. I meet Beatrice Cointreau, represented by her champagne Gosset. She told me that she would attend my dinner in June, and would bring a very old alcohol.

I did not notice precisely the years of the wines or the precise appellation, but here are some remarks :

The Puligny Montrachet Les Pucelles Domaine Leflaive 2003  has a power to explode in the mouth, which is very different from: 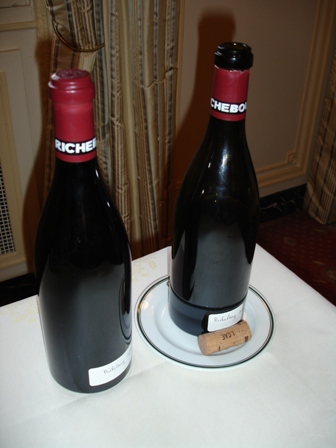 Hermitage white Chave 2003 which is a powerful but pushing on one line like in the sport play rugby, when the Puligny explodes

The Corton Charlemagne Bonneau du Martray 2003 seems to be not completely formed. It promises a lot.

In one room for reds at the first floor of restaurant Laurent, the samples are not to be ignored:

The Richebourg Domaine de la Romanée Conti 2004 is very highly emotional. The smell evokes highness. And in mouth the sensuality is extreme.

The Hermitage Chave red 2003 is a bomb. The smell is of a black berry very green, combined with a huge pepper. It is amazing how it invades the mouth.

On the contrary, the Volnay Santenots-du-Milieu Comtes Lafon 2003 is an angel. It is a poem. All in it is delicious, like a noble discussion between people of the 18th century in Versailles.

So, three expressions of completely different red wines, all of them expressing something very intelligent.

I drink a Pol Roger 1998 in magnum, a Gosset of a special cuvee 1999 and I go to try Chateau Haut-Brion 2004. The nose is very noble, very exciting. In mouth it is more a promise than a great wine.

In the room for sweet wines, I drink a Vouvray Huet Mont du Milieu 2004, very generous and natural, a Riesling VT Zind-Humbrecht probably 2004 which is elegant and a little more linear. The wine of Cauhapé 2003 is expressive, but invaded by sugar, and the Chateau de Fargues 2001 wins easily as Alexandre de Lur Saluces had chosen to show a very great year, a success for Fargues as it is for Yquem.

We go to our table, and at my table are, on my right Jean Hugel the young dynamic man being 81 years old and who talks endlessly, on my left, Alexandre de Lur Saluces, and on the left of Alexandre, François Peyraud, the owner of Domaine Tempier in Bandol. I talked mainly with these three gentlemen as the form of the table did not allow to talk with people being farer, as the general noise was great.

The dinner prepared by Philippe Bourguignon and Alain Pégouret was :

As I know very well Philippe, I knew immediately which intentions of combinations were behind every choice. All the wines were from 1997.

The Riesling « Clos Winssbuhl » Zind-Humbrecht 1997 was for me a little limited, but Jean Hugel made compliments about its genuineness, so, he is the expert on such wines. I will trust in him.

The Puligny-Montrachet « les Combettes » Domaine Leflaive 1997 was absolutely bluffing by its power and its interest. Such a broad spectrum of flavours is rare. The Riesling was proper on the asparagus, and the Puligny went admirably with the lobster.

On the red fish, how would react the Bandol « Cabassaou » Domaine Tempier red 1997, as it was associated to the Château Haut-Brion 1997 red. The Bandol behaved well. The Haut-Brion as a magnificent nose, and has been the only wine of this dinner to express the specific limits of the year 1997. Every other 1997 performed, but the HB did not. There is a reason for that : I know quite well HB in good years. So the difference of 1997 with other years was more obvious to me.

The Bandol has not a structure as precise as the HB but was warm enough in its heart to shine on the fish. The sauce was a little too aggressive for me. I would have preferred that the meat of the fish would have been left more free to show itself. It would have enlarged the two wines.

Alexandre and Jean know me, and they know that I can be enthusiast. When they saw me being tetanised by the incredible beauty of the next course, they were anxious on my health.

I was enjoying one of the greatest possible combinations which exist.

The vin jaune, Château d’Arlay, Côtes du Jura 1997 formed with the cappuccino of morels an unforgettable match. It was heaven, pure heaven. I was on a white cloud. Immense.

On the three cheeses, three wines.

The Corton de Bonneau du Martray red 1997 is an extraordinary wine. All in it is pure grace. So light, so romantic, so refined, it has every possible weapon of soft seduction. A great wine;

The Corbin-Michotte Saint-Emilion 1997 comes from a castle where wine is always well made. But I was not surprised.

The Château de Fargues 1997 is purely delicious. It was provoked by a Roquefort which is creamy but very powerful. It was a fight – delicious – but not a real combination of pleasures.

The dessert, very exact, went well with a very high class wine : the Gewurztraminer Sélection de Grains Nobles (SGN) Hugel 1997. This is elegant, powerful, but is airy. This is the secret of these perfect Alsatian wines.

At the beginning of the dinner, the president of the Academy, Jean Pierre Perrin of Beaucastel, had made a very fighting speech talking about international taste versus French cultural tradition for wine. At the end of the dinner, Jacques Puisais, a true gastronome, made a very poetic speech commenting all the wines and combinations. I agreed on almost every points except one : I am not in favour of the bread with cheese when wine is concerned. I prefer the weddings for two, to the weddings for three.

What would be my ranking for tonight?

1 – the Arlay yellow wine, as it jumped to the sky due to the match with the food

3 – the gewürztraminer Hugel as it combined power and lightness

4 – the Puligny Leflaive, as its palette of tastes was extremely shining.

And the wine of the night, for me, but I pretend to no objectivity, has been the Richebourg DRC 2004. A dream.

I noticed during this meeting that many people read the bulletin that I send every week on my adventures. They made nice comments.

I am very proud to be accepted in a group where are people making wines like Romanée Conti, Haut-Brion, Leflaive, Chave, and so many others.

I have spent a magnificent moment.