We meet by restaurant Spago in Beverly Hills, a place where it seems more common to come with a Rolls Royce than with a bicycle.

Jean-Michel Cazes came with his son who will take the responsibility of the familial group in a few weeks. 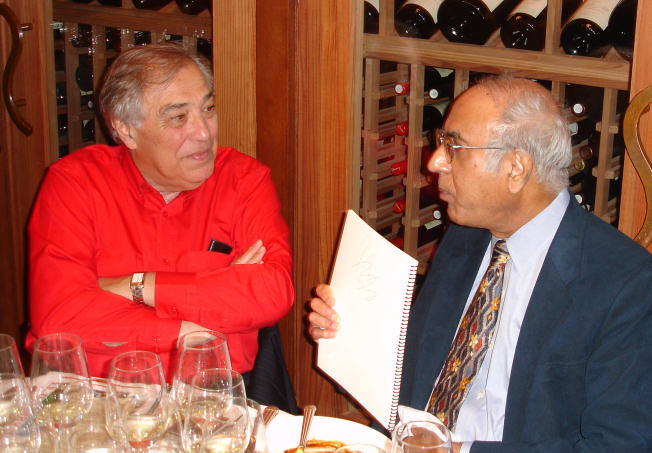 By a nice symmetry, I sit next to Jean Trimbach, when yesterday I was sitting next to Jean-Michel Cazes. I will not talk a lot with Jean, as Jean Michel talks endlessly. And, as what he says is passionate, I listen to him.

I will have the same problem to taste the wines as I had yesterday : to taste the wines in a constant way, I drink when I am served. So the wine is not really opened. It becomes more and more charming when it opens in the glass. So my notations are more restrictive than the real value of these wines.

I have noticed that in each flight you can easily rank the wines just by looking at the glasses. The glasses which are rapidly empty were filled with the best wines. 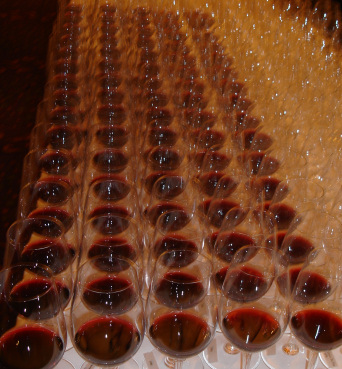 glasses ready to be served

We were able to “learn” Lynch Bages as no other mean could give such a complete view of the wine making of this prestigious property.

The cook was very proper.

The service of the glasses (roughly 1,500) was efficient.

Here are my notes, rather simplified, but which give my rapid impressions.

Lynch-Bages 1937 : more welcoming, more round, Nice adidity, but does not keep the distance as the 1934.

Lynch-Bages 1999 : the nose is rather dry. The taste is nice, very similar to the 1934, which I find very interesting.

Lynch-Bages 2002 : very young, rather more modern than the 99, with a more insisting wood. Goes very well with the risotto.

Lynch-Bages 1957 : the nose of red fruits pleases me a lot. Very nice in mouth, balanced and dense. All the table has loved this wine. It is an interesting surprise that everyone applauded a rather discrete year. Ranked 1st in the 1st Flight.

Lynch-Bages 1950 : the nose is a little acid, but positive. Nice taste, complex, exploring many directions. It is for me the purity of what should be Lynch-Bages. A very nice structure. Ranked 2nd in the 1st Flight.

Lynch-Bages 1952 : the nose is slightly animal. In mouth I appreciate and I like this very evolved taste, rather good. Ranked 4th in the 1st Flight.

Lynch-Bages 1998 : the nose is very fruity. It is a little tight in mouth, but the wine will nicely improve.

Lynch-Bages 1991 : the nose is rather disagreeable, watery. In mouth it is very strict, but all in all, its is a pleasant wine.

Lynch-Bages 2003 : this wine is closed. And there is largely too much wood at its actual taste. Difficult to say what it will become.

Ormes de Pez 1989 : the nose is elegant. It is slightly bitter in mouth.

Ormes de Pez 1962 : very nice taste, round. It has limits, but it is nice. It has nicely developped in the glass. Ranked 3rd in the 2nd Flight.

Lynch-Bages 1962 : the nose is not as frank as the Ormes de Pez. Agreeable in mouth even if a little closed an a little short. When it is opened, it is nice. Ranked 1st in the 2nd Flight.

Lynch-Bages 1947 : The nose is animal. A little bitter. Becomes largely greater after some minutes.

Lynch-Bages 1945 : Slightly acidic (wines with only a few oxygen). The structure of this wine is nice. Ranked 4th in the 2nd Flight.

Lynch-Bages 1929 : The nose is a little muddy, mushrooms. It is obvious that the wine has been great. Tired by the first sip, it grows enough to show that it has been great. Ranked 2nd in the 2nd Flight.

Lynch-Bages 1982 : A little tired in the nose. Very handsome in mouth. Very bright and flamboyant now, it will not age as the 1990.

Lynch-Bages 1989 : A little destructured. I was waiting for more. Bipin did not approve my judgement. The reason is that his glass (that I tasted too) was largely better. I am very sorry for that weak performance.

Lynch-Bages 1990 : came too cold. It has a great structure, and I see a very great future. Ranked 3rd in the 3rd Flight.

Lynch-Bages 1996 : wine rather conventional. Not yet put in its future track.

Lynch-Bages 2000 : Great splendid nose. Very great wine. Not very long, but will get length. I believe a lot in this wine. Ranked 2nd in the 3rd Flight.

Lynch-Bages 1970 : This wine is very agreeable. Not complicated at all.

Ormes de Pez 2000 : Not bad at all. Rather limited. But finally agreeable.

Lynch-Bages 2001 : elegant, agreeable, not much future for this wine which will have a short life. But with objectivity, it is really nice now.

Lynch-Bages 1975 : Limited, tight, I do not find anything inspired.

Lynch-Bages 1981 : rather agreeable.I find it a little limited. But it must be observed that at that moment, my palate has not an Olympic form.

Lynch-Bages 1988 : The cheese blocks my appreciation on this wine. I am tired. So, I will declare only one wine as ranked.

Jean-Michel Cazes is a marvellous speaker. He has an historical vision; he is calm, seeing the future of the world of wine. One feels that a lot of work has been made to put this wine at the top of fame.

I had felt that the period 1920-1929 was the best for Montrose, when I attended the huge tasting of Montrose. Clearly today, the best period is 1950-1962. It is now the most accomplished, whatever are the promises of recent well made wines.

I have noticed that for some years, Orme de Pez performed more that Lynch Bages which is a good thing.

I had a weak LB 1989. I was disappointed as I have largely bought this year.

I drink generally wines more oxygenated and a little warmer. In that case, this gives since the first sip what I got by the last drop of every glass.

I am happy to have got a very rare perspective on this property. This wine has a nice terroir, and does not need to look for too much wood as it is not necessary. I trust in the intelligence of the family to keep a leadership taking into account the lessons of history.

Bipin having asked me if I wanted to share a dinner with him, he mentioned the name of a restaurant : Mori Sushi that a friend of Jeff Leve had mentioned to me, saying : you cannot leave L.A. without going there. So, I said yes. We were four, A Japanese journalist (who will help us to understand some of the sushis), Jean Trimbach, Bipin and I.

We took « Omakaze », the menu by which the chef creates what he wants. It was remarkable.

We drank a Bollinger R.D. 1990 that I had bought for the occasion, a Dom Pérignon rosé 1995 brought by Bipin.

To thank Bipin of his generosity, I had brought from my cellar a dry white wine from Canary Islands 1828, so having 101 years more that the oldest Lynch Bages of today.

The taste was extremely expressive, strong as an old Jerez.

The Japanese journalist was extremely impressed, thinking of history. She asked me if she could keep the empty bottle. Normally I keep the empty bottles for my private museum. But I was so happy with my entire visit to California that I gave her the bottle, last and oldest wine of all a friendly and generous stay in California.