My trip to USA has been organised in a much unexpected way. Bipin Desai organises two meals with wines of two producers, Trimbach and Lynch Bages. I would not necessarily fly 6,000 miles to taste these two wines that I can easily drink if I visit the properties, but as Bipin had been kind enough to invite me for the huge tastings of 38 years of Montrose and 22 years of Pichon Comtesse, I decided to say yes. I announced on the forum of Robert Parker that I would come to California, and immediately I received several proposals for dinners. So, seeing how enthusiast and generous people that I know only on my screen would be, people building very consistent programs, I decided to say yes to some, the only refusals being for my health, as this week will see me drinking a lot of wines.

I will describe my trip more like a diary than like wine tasting notes, but as wine is the main theme, wine will be largely concerned. To determine the wines that I would bring has not been so easy, as I wanted to adapt my wines to the general level of what would be brought, not under, not too above. I took the following wines in my cellar : Grands Echézeaux Domaine de la Romanée Conti 1974, that I wanted to taste with Californian wines of the same age, Pétrus 1959 will be brought for a dinner on which I know nothing, but organised by a man who is known to make great dinners, Potensac 1955 will be a birthday present for a friend born 51 years ago, Yquem 1953, Pichon Comtesse 1945, Yquem 1935 for some dinners. The last wine is a Canarian wine of 1828, is to make a surprise to Bipin, to thank him. I had wanted to bring for friends a Cyprus wine 1845, but due to moves from my cellar to my home, the wax had broken and there was a linkage which obliged me to keep it home. It will no be lost. French amateurs exist.

The direct trip is an eleven hours flight. I am sitting next to a man compared to whom George Foreman would be a feather weight. It makes the trip even longer. A film of Harry Potter shows the evidence that there is no limit to stupidity in using wonderful techniques for primitive emotions. To take a plane is a school for serenity. You spend your time in queues, you wait for an improbable progress in your queue, you are considered as if you were the most dangerous gangster on earth, and I must say that Hitchcock is a small kid pretending to create suspense, compared to the unparalleled stress when the rolling luggage provider stops its move when everyone has got his bag except me. The staff in charge of luggage is largely better than Mary Higgins Clark or every other best seller’s authors.

A limousine is waiting for me, which is a sign of civilisation. The Campton Place hotel is nice. This time, no queue on the registration desk. I will sleep with many stops for 16 hours, not knowing at any moment on which time table I am programmed. After a solid XXL breakfast, I go walking in town. On May 1st, in USA, people work, when in France every pretext is good to stop working. But this day is a day of demonstration about the acceptance of illegal immigration. Some groups are formed, with the obvious pleasure to be together, smiling, singing, dancing sometimes, and delivering messages written in a way that at a small distance you cannot read any. I was in the middle of this small crowd, policemen had closed some streets. When I read the next days what was said about the importance of the demonstration, I was very astonished, because all what I had seen was extremely light when compared to what newspapers mentioned. What amazes me is the variety of faces, of people, of poverty in the streets of American cities. Paris was known for its “clochards”. I have seen today many more than in one year in Paris. One young thirty years white broke was scratching his leg of a very gray colour which has certainly never been in contact with water for the last decade. I find a café in a pedestrian street where I eat on a table outside. A woman indefinitely lifted comes with a dark dog with pink ribbons around the ears. She is exactly how American women of an indeterminated age are caricatured. The man who plays accordion goes from the Beatles to the Third Man, and from Edith Piaf to Freddy Mercury with the same constructed smile.

Ken comes to take me to Jack Falstaff, a restaurant with an external decoration of a building made of concrete after the Armageddon attack. We are not far from the Giants Stadium, and as our room is in open air inside the building, the noise of traffic could be disturbing. But in fact, passionate as we were, we will listen to nothing. I begin to open some bottles by 4 pm, as many have already been brought. I open some of them and I receive a major help by Mark, who will open a lot of them. We put all the bottles in a row, with the corks and capsules associated to them. Very frightened, I see many people coming with more than twice as many bottles as we are. Many of them bring their Riedels.

Ken is so happy with this event that he opens a half Krug Grande Cuvée, very agreeable as we work so hard to open all the bottles. Everybody is there and by 7 pm precisely, Christine, who organised everything so well declare that the tasting is opened. I say a few words to thank everyone for their generosity and I give advice on the way to approach old wines which are not familiar with many members of our group. I sit at my place, and Paul will make a very long speech to present his fabulous bottle, the Martin Ray 1953 from Saratoga, Cabernet Sauvignon. Then, when his speech is over, the glasses in front of me are poured by an army of friends wanting that I try this and that. And I think that I will never be able to remember all what is poured to me. But I am not the only one to be so generously provided with wines. All around me everyone exchanges their wines with the others. The atmosphere is highly friendly. I say to Christine that I am afraid that so many wines are drunk when the dinner has not yet begun. And I am right, as a soup will help a lot the wines, mainly the whites, to become greater. So many wines are poured in my glasses that I am unable to say which one it is and when someone asks me : “did you like it”, I say yes, not knowing which one it was. But of course, I remember some of them.

Some whites have aged very differently. A Chardonnay 1977 Stony Hill Napa Valley pleases me a lot, with a nice Burgundy smell, sweeter in mouth than Burgundy.

In all the wines that we have drunk, I do not see a real difference of aging between French and Californian wines. The proportion seems to be the same of tired wines. The Gamay 1970 Joseph Swan has surprised everyone as it was extremely young and expressive. I did not notice corked wines, and the ones who were slightly corked did not show it in mouth.

I have found my Grands Echézeaux Domaine de la Romanée Conti 1974 to be rather tired after the travel and the heat in different steps of the trip. But its cork was largely tired when I found unusually young the cork of the “old” Californian wines, nearly not wet with wine, just a small circle being highly invaded by an heavy sediment of a black colour.

I have loved the Yquem 1953, a very nice, subtle and elegant Yquem (I saw that many friends having not the same perspective on Yquem did not probably approach it as I did), and I saw that my American friends are real kids. While I was sipping with pleasure the Yquem, served at last, to be the last perfume of the night, I saw many of them coming back to the reds!!!! 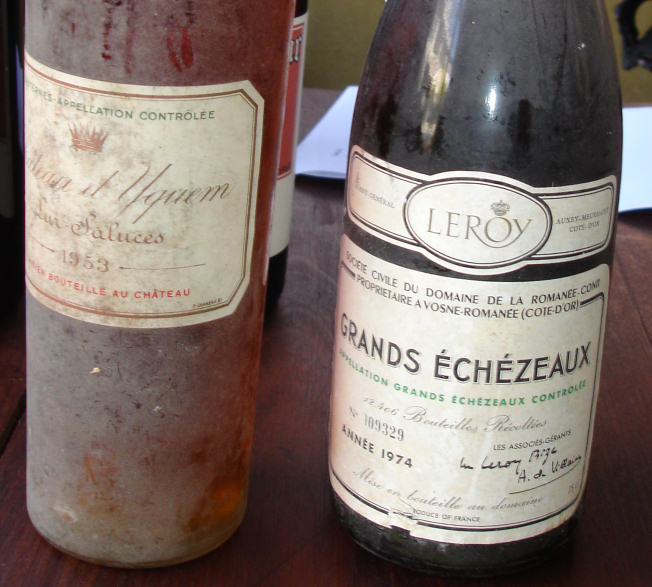 Within the group, I saw a man whose face was known to me. He had attended already two of my dinners !

Everyone has been aware that Californian wines can age and that the slow oxygenation helped a lot the wines to perform precisely.

For me the two stars of the night are the two oldest, which will not surprise anyone : the Martin Ray 1953 was for me the most impressive red of the dinner, and the Yquem 1953 is a Yquem which is in the direct line of what Yquem should be.

The food has been extremely adequate; the service of the staff of Falstaff was highly efficient. I have really enjoyed being the excuse for this meeting and to help to see that Californian wines age well when one is prepared to drink them as they are.

And when I see their potential to age, I would really think that it is probably not necessary to push the young wines to their limits in taste, as there is a certainty that they will age wonderfully, keeping a significant harmony and subtlety.

Thanks to all for their generosity, thanks to Christine to have so well managed the event, and thanks to all the friends for their so passionate attitude towards nice wines.